How should I choose the dbi of the Antenna?

How should I choose the dbi of the Antenna?

Customers often ask before buying an antenna: Do you have a high-gain antenna here? The higher the better!

In fact, the gain effect of the antenna is not higher the more suitable for everyone, or you need to choose according to your own situation. Here is a little tip.

Antenna gain is used to measure the ability of the antenna to send and receive signals in a specific direction, and it is one of the important parameters for selecting a base station antenna.

The higher the antenna gain, the better the directivity, the more concentrated the energy, and the narrower the lobes.

The higher the gain, the longer the antenna length.

1) Antennas are passive devices and cannot generate energy. Antenna gain is simply the ability to effectively concentrate energy to radiate or receive electromagnetic waves in a specific direction.

2) The gain of the antenna is generated by the superposition of the oscillators. The higher the gain, the longer the antenna length.

3) The higher the antenna gain, the better the directivity, the more concentrated the energy, and the narrower the lobe.

Increasing the antenna gain increases the coverage distance, but at the same time narrows the beam width, resulting in poor coverage uniformity. The selection of the antenna gain should be based on the matching of the beam and the target area. In order to improve the gain, it is not advisable to narrow the vertical beamwidth too much. Only through the optimization scheme, the level outside the service area can be rapidly dropped, and the side lobes and back lobes can be reduced. It is correct to reduce the cross-polarization level and use a feed network with low loss, no surface wave parasitic radiation, and low VSWR to increase the antenna gain.

Finally, simply increase the gain.  Although the coverage distance is greater, coverage gets narrower. 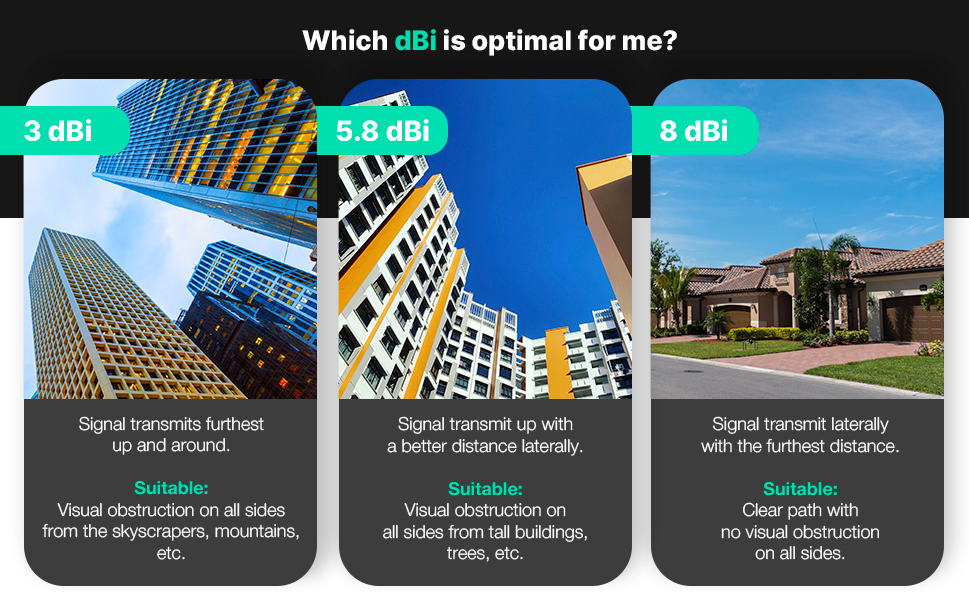 You can refer to this picture to roughly select the appropriate antenna dBi gain.